A key is an attribute or set of attributes that uniquely identifies a tuple in a relation. The keys are used to access the data stored in tables quickly. The database keys are also used to create relationships between different tables.

Different types of keys in databases are as follows:

An attribute or set of attributes that uniquely identifies a row or record in a relation is known as primary key. Important points for a primary key are as follows:

The primary key that consists of two or more attributes is known as composite key. For example, the following relation uses two fields RollNo and Subject to identify each tuple. This is as example of composite key. 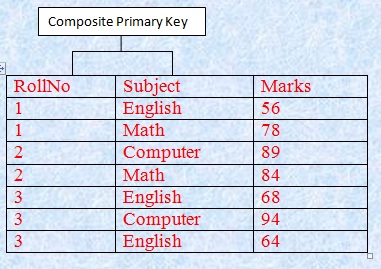 An attribute or set of attributes that is used to physically sequence the stored data is called sort key. It is also known as control key. The stored data can be sorted in different ways according to the user requirement.